by Jessica Pollack – As originally posted on gazettessports.com 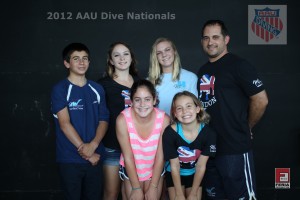 Long Beach resident, Sonnenberg, earned her highest score of the meet on an Inward one-and-one-half somersault in tuck position on the 1-Meter Springboard.  Her total score of 50.60 points is at a level of divers in much higher age groups.

Huntington  Beach resident, Loschiavo earned his best overall scores of the meet with his Back one-and-one-half Somersault with two-and-one-half Twists on 3-Meter for a total of 67.20 points.  His highest base score overall was on a front one-and-one-half somersault off the 7.5-Meter Platform.  He averaged 9 out of 10 points from all judges earning 40.5 total points for the dive.

In diving, the more difficult the trick, the higher the degree of difficulty (DD).  While the front one-and-one-half somersault earned the highest judges scores, the total point value of that dive was less than some of his lower scoring, but higher DD dives like his twister on 3-Meter.  That is why Loschiavo and Sonnenberg’s coaches at McCormick Divers stress excellence in the basic dives to build a solid foundation for high scores as the degree of difficulty increases.

Loschiavo and Sonnenberg train in Long Beach with McCormick Divers at Belmont Plaza Olympic Pool.  Several of their teammates qualified to compete at the AAU National Championships.  The two were joined by Fountain Valley residents Erica Curry and Mary Sojian, and Lauren Skinner of Long Beach.

The fact that he won National Titles during the Olympic Games and that he trains at a pool built for the 1968 U.S. Olympic Trials is not lost on Loschiavo.  His eyes light up with a gleam of determination at the mention of Rio 2016!