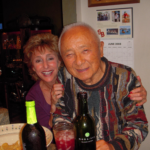 We all know Debby. An accomplished coach and athlete, and has done wonders for our divers all over the So Cal area. Recently, she became heavily involved in the reconstruction of our beloved Belmont Plaza Olympic Pool, wining and dining with local politicians and business people to make sure diving in part of the new complex. Along with meeting the powers that be, she was encouraged by these same people to join the Long Beach Century Club and have McCormick Divers affiliated with the sports group.

For those that don’t know, the Long Beach Century Club was “formed in 1957 by prominent Long Beach sports enthusiasts as a nonprofit corporation dedicated to the promotion of amateur athletics in the city”, according to the groups’ Facebook page.

Fast forward a couple of years from that first meeting to January 30, 2017 where our own Debby McCormick will receive the “Ernie G. Pullman” award for “unique achievement in sports, including community involvement.”

Debby said, “this is a great award to receive from the Century Club and I am honored to get it from a great group of people that support aquatics, diving and the new pool. Can’t wait for the party!”

Here at McCormick Divers, the coaching staff, parents and Booster Club are excited and happy that our very own Debby is recognized for all her efforts, hard work and dedication for the promotion of our club and diving in Long Beach.

Here’s to you Debby and congratulations!