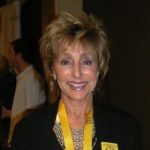 Debby Lipman, as she was before she married Glenn, was an outstanding diver in her own right. She trained under Glenn and competed for 13 years. She has 23 National and 10 International diving medals to her credit.  Debby graduated from and competed for California State University-Long Beach, coaching the men and women diving teams from 1976-1984.  She began coaching with Glenn in 1976, and they coached together for over 20 years.  She has also served as a judge and coach both nationally and internationally. Since Glenn’s passing, Debby has kept the McCormick Divers in the same spirit as when Glenn was alive.  Those who have been fortunate enough to dive with them remain part of their extended diving family. Debby was also a competitive tennis player for over 25 years. She was inducted into the Southern California Senior Tennis Hall of Fame in 2014. During her tennis career, she accumulated over a dozen national tennis titles including a #1 National ranking in Women’s doubles in 1999. Along with her many activities, she is also on the Board of the Aquatic Capital of America. Her goal is to get the Belmont Plaza Olympic Pool rebuilt in Long Beach and get Glenn’s name honored in the diving well.

Charly is originally from Corpus Christi, TX.  He was coached by his father, Trey Collins, all the way through high school.  He was District 30 Champion 2 years in a row and Region VIII Finalist 3 years in a row.  In 1995, he dived for Palo Alto College in San Antionio, TX by Stan Randall.  Charly was NJCAA All-American ’95-’96 and ’96-’97.  He also coached for 8 years with Alamo Area Aquatics Diving and halped produce divers that went on to acquire college scholarships, as well as competed at national level meets.  He has explored the opportunities in professional show/high diving.  In 2001 he was in the inaugural cast of the Sea World of Texas show “Viva”, which showcased the artic animals of the Pacific with synchronized swimmers, aerialists and high divers.  He joined McCormick Divers in January of 2004 and we are proud to have him on the McCormick coaching staff.