Glenn McCormick started coaching in 1953.  Sadly, he passed away in 1995, leaving behind a trail of National, International and Olympic Champions.  His legacy is the McCormick Divers, which he formed in 1968 when the Belmont Plaza Olympic Pool was built for the 1968 Olympic Trials.

He was US Diving’s Ambassador to the world and a rare and caring human being.  Glenn was inducted into the Swimming Hall of Fame in 1995.  In 1996, US Diving established the Glenn McCormick Award.

These are the hand and footprints that he left behind:

A Tribute to Glenn P. McCormick 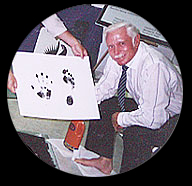 We were all stunned when we learned of Glenn’s sudden passing, the cause believed to be an earlier treated skin cancer that metastasized to the brain.  He was such a wonderful father, coach and friend to so many people. An inductee to the International Swimming Hall of Fame last May, he will sorely be missed but never forgotten. A memorial service held Nov. 19 was attended by over 400 people. The sign-in book, which contained the names of 13 Olympians, read like the Who’s Who of Diving. The mood was that of a somber celebration of life, a coming of age.

Glenn was born in Elgin, III., into the family of parents Paul and Hazel McCormick and sister Lila, three years older. Glenn’s father worked as a watchmaker at the Elgin Watch Co. in the post-Depression era. Always interested in sports, young Glenn was challenged by severe asthma until his mid-teens. In the summers, Glenn would often be found tinkering with his Model A Ford or at the local pool playing on the diving boards. In his freshman year of high school, he lettered in football and basketball but found his real niche was in wrestling, in which he made the first team as a sophomore.

In his senior year, Glenn won the Northern Illinois Sectionals and placed fourth in the state championships. With the country in turmoil over World War II, young men were joining the military in droves. Glenn was accepted into the Naval Aviation Program and received orders to report for active duty in September 1943—at 17 years old. Two years later, Glenn received his wings and became an officer. Sister Lila recalls once seeing a Piper Cub fly very low over their house. Glenn could be seen waving from the cockpit, giving their mother fits. Glenn enjoyed the officer’s life” and still found time to do some diving, tumbling and trampoline in the off hours. He often watched with great interest a young sailor named Bruce Harlan working out at the officers club with R. Jackson Smith.

After leaving the Navy in 1947, Glenn joined his parents in Long Beach, Calif., and dived for the YMCA, winning the Southern California Championships in the IM. He was invited to dive in an exhibition at the Pacific Yacht Club, where he met a cute young diver named Pat Keller and soon they became good friends. In the fall of 1948, Glenn enrolled at USC. The next summer, Glenn and Pat were married.

After an injury to both heels which took him over two years to fully recover from, Glenn competed in wrestling for the Los Angeles Athletic Club, winning the junior and senior Southern Pacific crowns and the Far Western Tournament. In 1952, he qualified to go back East for the Olympic Trials but lacking funds and workout partners, passed them up and retired from wrestling. Meanwhile, wife Patty won both events at the Olympic Diving Trials. Glenn went ahead by steamer in time to witness Pat win her first two gold medals at the Olympics in Helsinki. In 1963, Glenn graduated from USC with a masters degree in education, doing his thesis on the forward 1-1/2 with a full twist. He became the head swimming and diving coach at the Los Angeles Athletic Club, where his team placed second at the nationals, sweeping the diving events with Pat, Gary Tobian, Willie Farrell, Ann Cooper, Gail Benton, Irene McDonald (Canada), Patsy Plowman (Australia) and six others.

What Glenn lacked in experience, he made up for by training his team HARD. Four workouts a day (two springboard, two platform) six days a week. In 1955, Glenn joined United Air  Lines   and  helped   his replacement, Peter Daland, coach the Athletic Club and USC, which won the  NCAA’s,  earning  Glenn  a nostalgic gift, an Elgin watch.

The highlight of Glenn’s young career was the 1956 Olympic Trials. Pat again won both 3-meter and platform, Gary Tobian and Willie Farrell qualified on platform, Marley Shriver qualified on the women’s 400-meter freestyle team and Glenn was named the women’s Olympic coach. Even more amazing was that Glenn and Pat had become first time parents, with a son, Tim, in March of that year, five months before the Olympic Trials. With the Olympic Games in Melbourne several months away, Glenn coached girls Jeanne Stunyo, Barb Gilders, Pat, and Irene McDonald, who made the Canadian team. The girls worked out together every day and took the first four places in the Olympics. In platform, Pat, Juno Stover lrwin and Paula Jean Meyers finished 1-2-3 with Pat achieving her famous double-double gold medals.  She also won gold medals in two Pan-Am Games and some 27 U.S. national titles in her career.

Gary Tobian was the first person to  use  back  and  reverse  2-1/2 somersaults from the springboard and platform, under Glenn’s coaching. Tobian got the silver medal in both the ’56 and ’60 Olympics, winning the U.S. platform nationals six years in a row and the 1959 Pan Am Games. 1960 was the year Glenn and Pat had their  second  child,  Kelly.  Other young divers Glenn coached in the 1960’s were Larry Andreason, Luis Nina de Riveras, Barb McAlister, Linda Cooper, Greg Shuff, Edsel Mills, Ron Smith and Scott Cotlett. Son Tim grew up a pretty good athlete too, but didn’t care much for diving. He wrestled, played football and set a high school record in the pole vault.  Kelly shined in gymnastics before switching to diving at 14. She has won 10 national titles, two Pan Am gold’s, and a silver and bronze Olympic medal in 1984 and ’88 and recently was inducted into Ohio State University’s Hall of Fame.

By 1973, Pat and Glenn had outgrown each other and separated. Glenn continued coaching divers Jane Ward, Kit Salness, Judy Rothwell, Vicki Shaeber, Debby Lipman, Kelly, Todd Smith and Jeff Huber. In 1979, Glenn and Debby Lipman were married and since then coached together at the Belmont Plaza Pool in Long Beach. Together, they have traveled far and wide. Debby has won nationals in diving and more recently in tennis under Glenn’s unique coaching ability. Their joint diving team continues to perform well.

Glenn retired from United Airlines in 1986. He has always been active, running, playing tennis or golf three or four times a week, with great hand-eye coordination, which made the illness come as such a surprise. An MRI detected a dozen brain tumors after Glenn experienced some headaches, dizziness and fatigue only a few weeks before he died. Glenn is survived by his wife, Debby, son Tim, daughter Kelly and four grandchildren. Kelly and her husband, Matt, are expecting their second child, (the amino rumor has it as a boy.) The team is coping with their loss, its members held together by love and by Glenn’s lingering words of warmth. Glenn has been honored and respected in the diving community for many years. He has coached many Olympians and national champions, judged two Olympics (’84 and ’88) and two World Games (’86 and ’94) and received the Age Group Coach of the Year, Mike Malone and Fred Cady Awards, as well as his Hall of Fame induction last year in Fort Lauderdale.

Glenn the coach was soft-spoken but firm. He had a way of getting the best from his pupils by instilling self-drive, but they were also driven to please their coach.

Glenn the husband was an old fashioned romantic, always doing projects around the house and once writing a witty, clever poem for Debby’s birthday.

Glenn the scholar was always reading, studying, watching and practicing with uncanny recall. Glenn the high spirit almost always wore a smile, created the best Halloween costumes, and often pulled the funniest pranks.  His favorite was the birthday cake made with foam rubber that can’t be cut with any knife. Glenn the action fan loved the big screen heroes, like Van Damme, Stallone and Schwarzenegger.

Glenn the man was humble: he was proud of his accomplishments but would never boast about them.